Okay, let’s get to the featured book: Steal Like an Artist by Austin Kleon.

Many people looking to do better in life skip over this book because they’re not an artist, but they’re missing out on a short and insightful read that everyone can benefit from.

There’s practical advice on how to be more creative, productive, successful, satisfied, resilient, and joyful, and Austin’s simple and warm tone helps it go down easy, like mom’s gravy and potatoes.

And if you generally don’t go in for books like this because you don’t think of yourself as a creative person, you can change that by simply exercising your imagination. And as with anything, the more you do it, the better you get at it. That’s the “big secret” to being a more creative thinker, problem solver, and artist—putting in the reps. 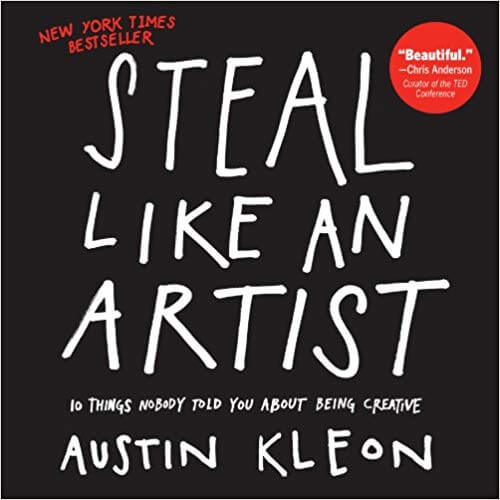 Because life is essentially an IQ test—a long and complex series of problems to solve—and the stronger our creativity muscle is, the better we’ll fare.

No matter how difficult or daunting our circumstances may be, a flash of creative intelligence will always reveal something we can do about it. Whether we act is on us.

So, if you want to squeeze more nectar out of your life—more sensation, love, enthusiasm, action, cooperation, and purposiveness—you want to hone your creative instincts, and this book is a good place to start.

Would you rather listen to this article? Click the play button below!

Want to listen to more stuff like this? Check out my podcast!

You have to be curious about the world in which you live. Look things up. Chase down every reference. Go deeper than anybody else—that’s how you’ll get ahead.

This is one of the simple secrets to doing great work—taking greater pains than everyone else. Scrutinizing every idea. Attending to every detail. Polishing every inch.

In The Star Wars Archives, George Lucas explained that this approach was a crucial element to how he created not just a movie to watch but an alternate reality to enter:

One thing I learned from Kurosawa is to try and instill an immaculate reality, an attention to detail that makes it real. Whether you’ve got dust or a rattling thing on the side of the ship, that adds another little element to it that keeps it looking real. What that does is say, “You believe where you are, no matter where you are.” I think I accomplished that. People think our places are real. There’s never a sense of, “Oh, I’m watching a science fiction movie.”

And that’s why Lucas carefully created every object in every frame of his iconic movies—every character, creature, costume, fork, napkin, tray, fixture, gun, chair, gadget, everything.

One of the surest routes to business success is creating products and services that a) solve your own problems (or problems you once had) and b) that you’d like to use.

In other words, scratching your own itch and betting that others have the same hankering.

Many people miss this key business insight and instead try to scratch itches they don’t understand (and sometimes don’t even exist) by chasing trends and creating stuff that resonates with nobody, themselves included. This never works.

As Eric Ries says in The Lean Startup, “Success is not delivering a feature; success is learning how to solve the customer’s problem.”

For instance, my foray into the fitness racket started with writing a simple book called Bigger Leaner Stronger that contained what I wished someone would’ve taught me back when I started training.

If I had this book from the beginning, I figured, I would’ve made far fewer mistakes and enjoyed far better results in far less time, and I’d spent enough time in gyms over the years to know that the same was true for many other guys as well.

It turned out I was right—my itches were not uniquely my own—and today, Bigger Leaner Stronger is already one of the bestselling fitness books of all time, with over 500,000 copies sold.

I took the same approach with creating Legion. It started with a simple question: What problems do I have with supplements and how can I solve them in a way that appeals to me? And again, I had interacted with enough people over the years to know I wasn’t the only one with those problems and sensibilities.

This appealed to me because I’ve gone for long stretches with no hobbies or activities to even look forward to outside of work, working out, and spending time with my kids and wife.

This makes for a highly productive but rather monotonous existence devoid of highs and lows that make more dollars than sense. It’s like living in a black and white movie—you can get by but eventually you yearn for some color.

For me, that’s golf, which I give a few hours per week to and not only enjoy while I’m doing but anticipate throughout the week, which is a powerful mood booster. This, in turn, has enhanced my productivity and relationships.

When I have more time I want to give to hobbies, I’ll take up something creative, like drawing, which I used to enjoy as a kid.

Hugh MacLeod says, “The best way to get approval is to not need it.”

In Meditations, Marcus Aurelius said, “Ambition means tying your well-being to what other people say or do . . . Sanity means tying it to your own actions.”

In other words, we shouldn’t strive to please or impress others but to simply live up to our own standards of what’s right and admirable. If we can do that, we can achieve a peace of mind that’s only possible through the self-satisfaction that comes from doing our best to become the best we’re capable of being.

Warren Buffett has talked about this concept in the terms of an “inner scorecard” and external one. Too many people focus too much on the external scores in life, on merely winning, and neglect the inner scores of how their efforts and actions match up with the best they’re capable of. Winning isn’t the whole picture. People can get lucky or exploit and abuse others or cheat and win.

People with higher standards, however, are just as concerned with the outcomes as how they’re produced. To some people, an unearned win is less satisfying than an unlucky loss because they’re playing by a different scorecard than most.

Establishing and keeping a routine can be even more important than having a lot of time.

Think of the relationship between time and routine like the sun and a magnifying glass—to harness its power, time must be concentrated and focused through routine, otherwise it spills everywhere, touching everything and disturbing nothing.

This is why establishing and keeping a routine can be even more important than having a lot of time. With the right structure, small stretches of time can be transformed into outsized achievements, and without it, vast swathes generate nothing but aimless chaos.

Have you read Steal Like an Artist? What did you think? Have anything else to share? Let me know in the comments below!

Oh and if you want to be notified when next book review goes live, hop on my email list and you’ll get each new installment delivered directly to your inbox.

The post My Top 5 Takeaways from Steal Like an Artist by Austin Kleon appeared first on Legion Athletics.